The log-likelihood function \(l\) is a function such that:

… where p is the generalized density under a model, evaluated on the dataset.

A lot of probability theory uses the idea of volumes. For example, the probability and expectation are usually defined as:

The main idea is that our ideas of distance no longer make sense. Consider the following: I simulated a bunch of random normal points in many dimensions and plotted the average ratio of the distance to nearest point to the distance to farthest point: 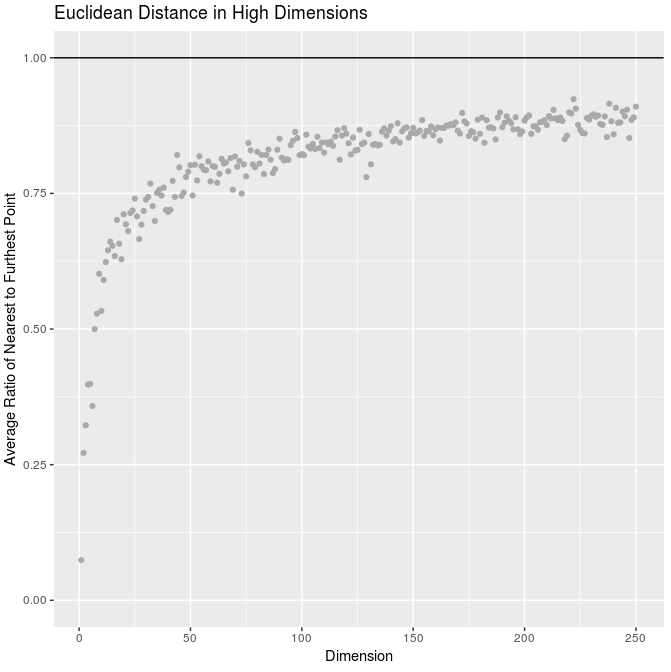 This ratio tends to one, implying that the nearest and farthest points are equally “close” / all points “look alike”.

On the same subject, consider a cube of unit lengths containing a sphere of unit radius in higher dimensions:

The edges of the cube keep more and more volume away from the sphere. In fact - the volume of a sphere starts decreasing after 5 dimensions.

Consider the following: In one dimension, if I draw from a normal distribution, numbers close to zero would be the most reasonable guess at what the draw could be. In higher dimensions, this isn’t really the case - if I draw from a 1000-dimensional normal, it’s ridiculously unlikely that I’d pick a vector that (0, 0, 0, …); a more reasonable guess would be “a vector of points where the mean radius is ye much”.

Now consider the likelihood of an isolated repeated experiment:

This is a function of many random variables (which collectively have a dimension n). This will have it’s own sampling distribution, and the position where it’s maxmized w.r.t. any of the x’s isn’t a typical value of the likelihood at all.

The maximum possible value of the loglikelihood in this case is -91.9, although it’s always much lower than that. Loglikelihood values around -140 for this experiment are typical.

We call values that lie in this region of typicality the typical set and it’s geometry is expected to be weird. From the other results, we expect it to be a thin layer of mass lying on a shell somewhere in a high dimensional space. The booklet “Logic, Probability, and Bayesian Inference” by Betancourt & the Stan Dev Team has another such example.

From Andrew Gelman’s blog: Interpolating between any two values of the typical set is rather unlikely to result in another typical sample. To sample from an arbitrary density, we can’t use grid or ensemble based methods, so a logical alternative is to start with a sample and obtain another sample using it, which leads logically to the idea of Markov Chain Monte Carlo, at which the Hybrid/Hamiltonian method is rather efficient.