Living a few months in Cambridge: (red is day, blue is night) 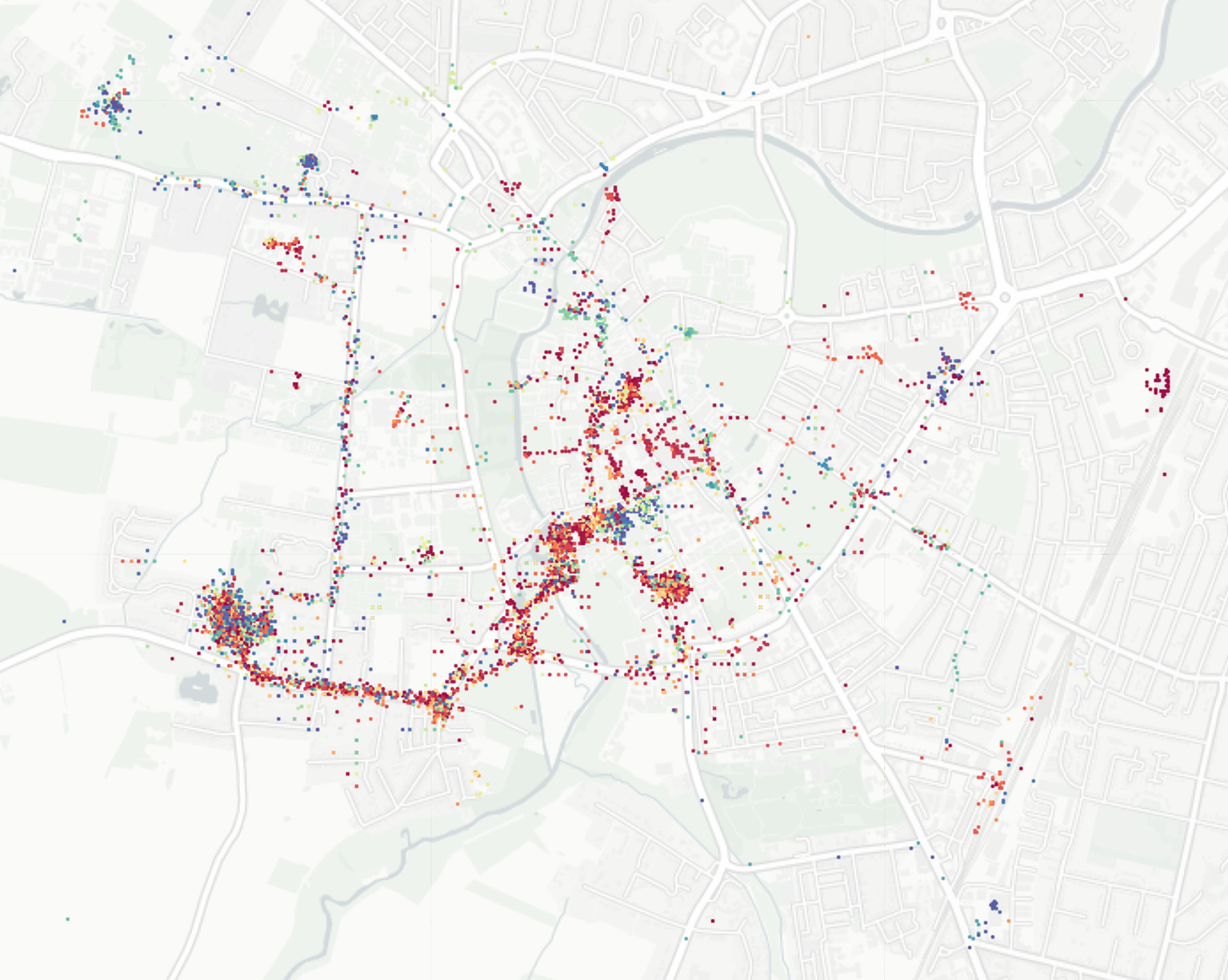 I love the blue mass at the astronomy centre and the movie theatre.

It seems reasonable and intuitive to think that the sample autocovariance function of a stationary gaussian process to be a sufficient statistic for its covariance function, and I read that this is indeed true for certain stationary GPs with a rational spectrum. This condition is quite similar (if not the same) for GPs to possess a state space representation.

It’s also interesting that not all GPs are ergodic. GPs are mixing (and hence ergodic, I believe) if the covariance dies off to zero after a point, or if its spectrum is absolutely continuous. Loosely, this means that the distribution of the process can be inferred from just one long sample. GPs with an exponentiated sine squared (ESS) covariance function, for example, wouldn’t be ergodic.

As a consequence, the covariance function of a zero mean GP with an ESS kernel, and similar signals, cannot be inferred from a single sample. This is reasonable, as no matter how long the signal is, there’s no new information in it after a certain point. Intuitively, a sample from a zero mean GP with an ESS kernel might look like \((3, 2.5, 3, 2.5, ...)\). The ESS is a kernel which is periodic, and the correlation of points spaced half a period apart is closest to zero (compared to any other pair of points), but still strictly positive. Another sample from that GP may look like \((-2, -1.7, -2, -1.7, ...)\). 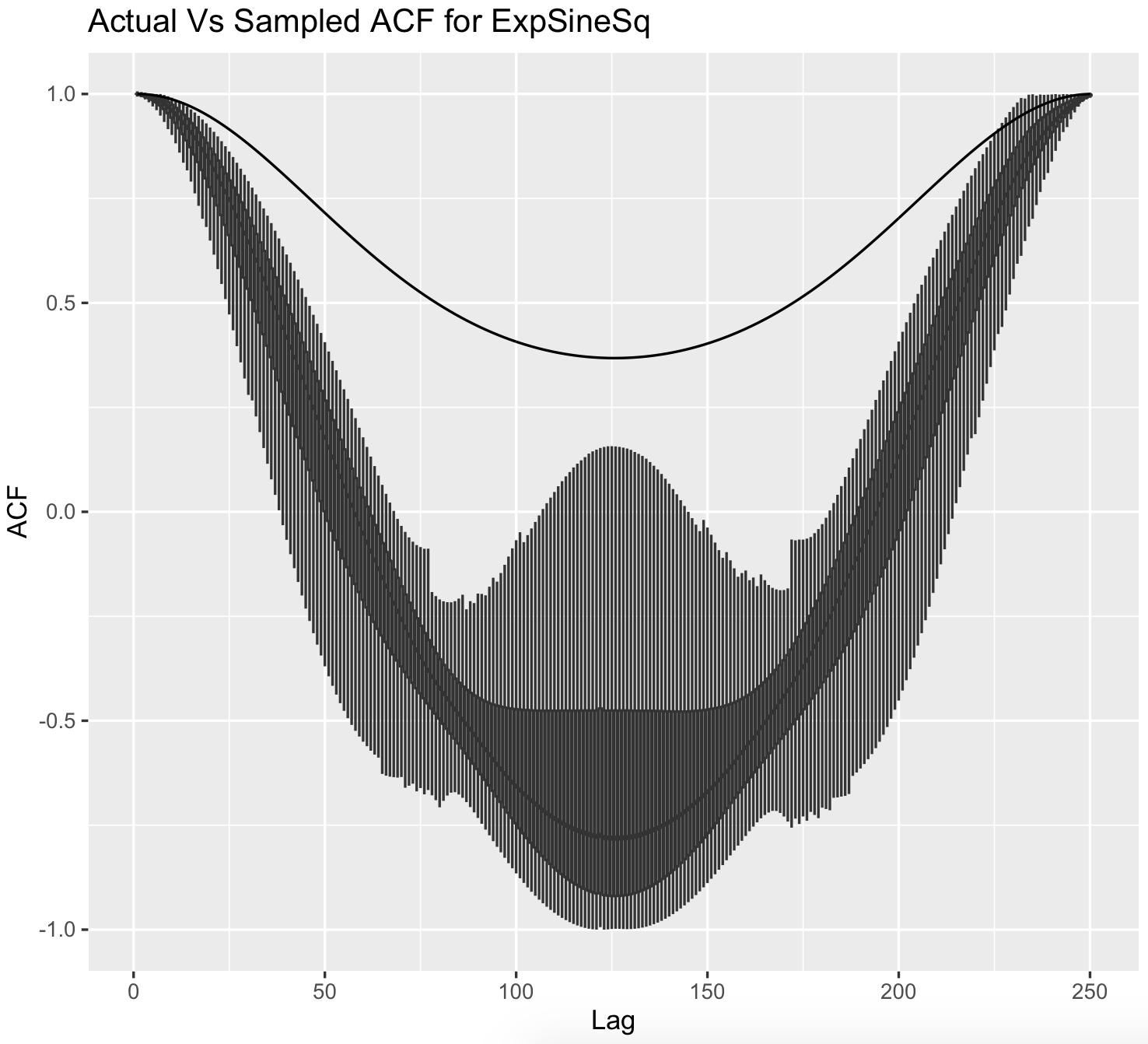 This minimal implementation below is based on the Librosa source on GitHub.

The GLA, in a few words, is an algorithm to find a matrix \(X\) such that the frobenius norm:

(with \(S\) corresponding to the STFT operation and \(S^{-1}\) to the inverse) is minimised (the absolute value of \(X\) - the spectrum - must be known and fixed). This norm is supposed to be zero for “proper” STFTs, but it isn’t when initiated with random phases like in the code above (the STFT has redundant information, so one point may be used in multiple windows - so when initiated with random phases, the matrix might not correspond to anything sensible and may be inconsistent due to the windows overlapping). It is quite interesting to me that, in a probabilistic sense, STFTs of signals would probably only ever admit a density where this norm is zero (i.e. if the STFT was consistent in the overlapping windows). And yet, by minimising this norm, we approach an STFT with phases more or less consistent with the spectrum we’ve got, so this “loss” doesn’t correspond to a likelihood at all.

I toyed around with the idea of fitting some reinforcement learning models for game balance two years ago but never wrote it up. I saw a Google AI blog post on this recently, which had me digging up some of this old work.

I wrote up an implementation of an inefficient table-based Q-learning algo that has a dataframe contain all possible states and future states in tic-tac-toe. The (pretty ugly) code is below. Here, a reward is +1 if x wins, -1 if o wins, 0 otherwise.

I coded up some classes in python but haven’t gotten around to coding up the RL side of it.

One neat trick: as moves can be special and do weird stuff, I coded them up as dicts of metadata, with a field named “special_effects” that contains a lambda function that takes in the opponent class instance and applies the weird stuff to it (iirc).

Another point, sometimes one can simplify decisions as other choices may be strictly worse. Then, simple simulation can lead to the probability that a party wins, as a function of input params.

I got two speakers’ data from the VoxCeleb dataset (about 500 5-second samples, which perhaps is not enough) and tried to fit some voice conversion models. First attempt was a VAE type model, with one encoder that encodes mel-specs from both speakers, and a decoder for each speaker that decodes the mel-specs from some latent variables. I also added a “cycle-consistency loss”. It didn’t work - the converted mel-specs (mel-spec of speaker A -> Encoder -> Decoder_B) weren’t understandable at all, although there was vague feature-transfer going on. I also tried fitting the CycleGAN to this data, but no luck there either. Again, some vague transfer going on but the converted samples just sounded like the source speaker.

Fancy ways to do this might include fitting a neural net or some kind of a gp to the conditional density, but here, I literally just fit a 4d mvn mixture to the whole dataset. To condition, we just plug in the pickup position and renormalize (Bayes rule). 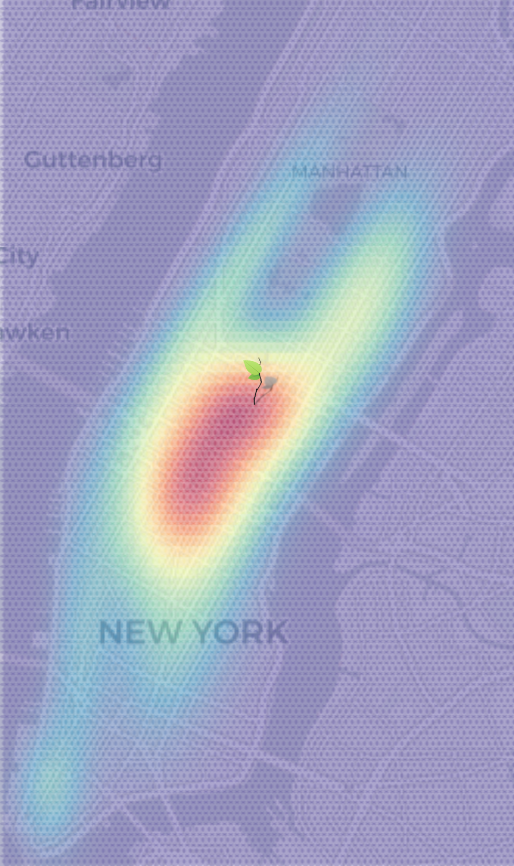 Google’s Quick Draw dataset contains multiple observations of quickly drawn envelopes. I fit a 256-component restricted boltzmann machine (heavily overparameterised; not a great model - I know) to the data, which represents a big nasty distribution over the random field that represents an envelope image. Now, starting off with a completely random image, using Gibbs sampling, we can make our way to the typical set of the distribution, which hopefully looks like an envelope. Here’s what the burn in looks like:

Inferring the Extent of Differentiability

Let’s say that we have an observation of a noiseless function but we don’t know how smooth it is. You could probably fit a Matern GP with different smoothness parameters to see which parameter maximises the log marginal likelihood (the matern parameter corresponds to the number of times one can differentiate a sample from the gp).

Below, I’ve simulated a Matern GP with a particular parameter, and fit it using parameters ranging from \(\\{0.5, ..., 5\\}\). The color & label correspond to the parameter while sampling. 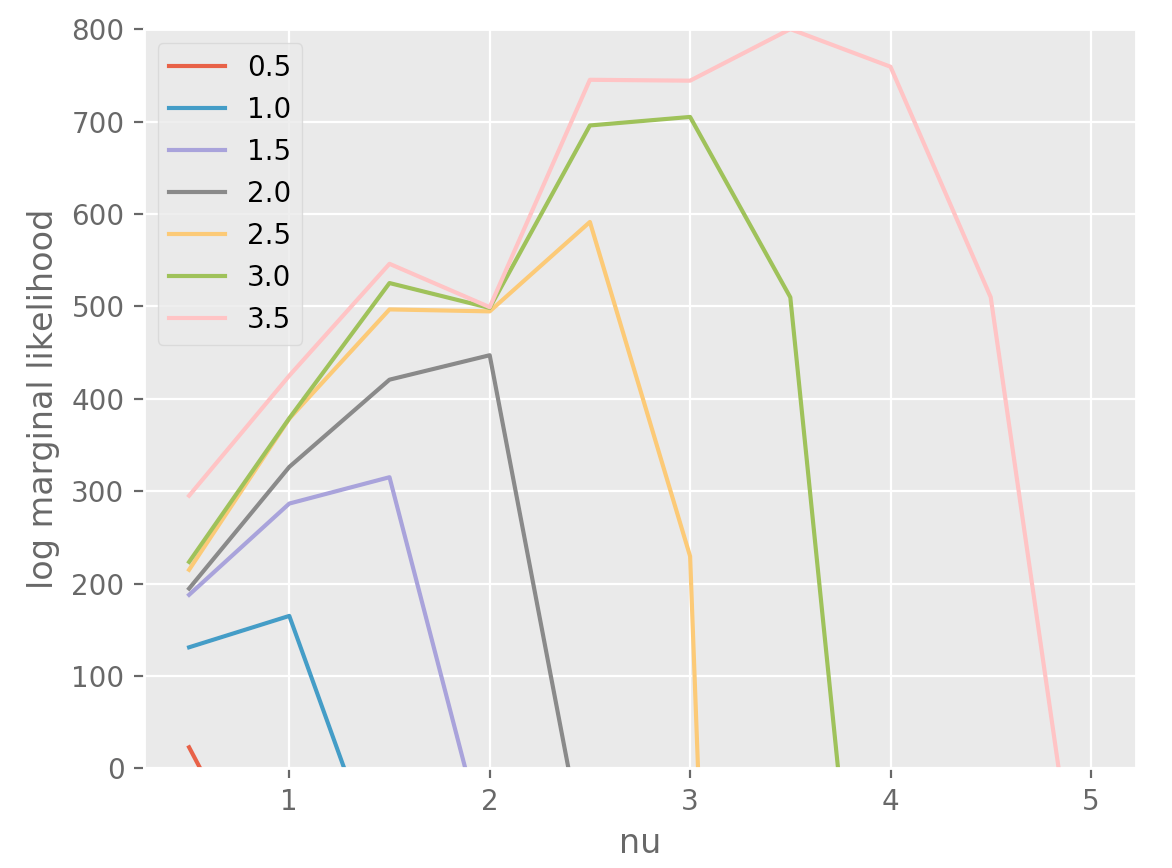 I used the S-PAD and the GP-PAD models from Richard Turner’s thesis to make these plots using some random audio data from the internet. 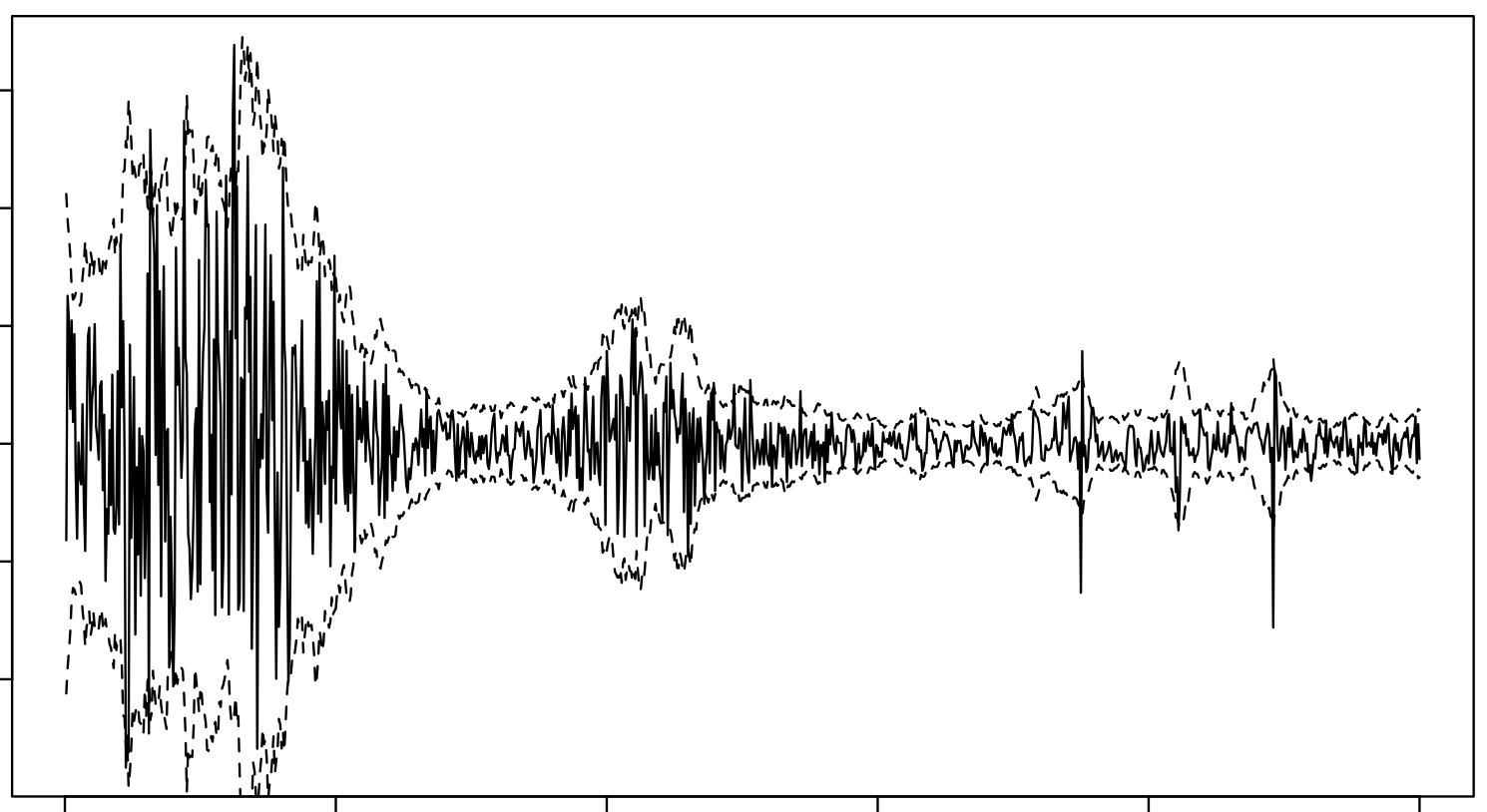 I fit a spline on a sphere representing my d20. The color represents the model probabilities of landing on a face. The distance from the centre represents the proportion of times my dice fell on a particular number during six hundred trials (empirical data in other words). I was mainly testing out a plotting idea here (and if it’d be possible to fit splines on sphere - the latter is pretty easy, with a GP, just have the distance be something like a great-circle distance). 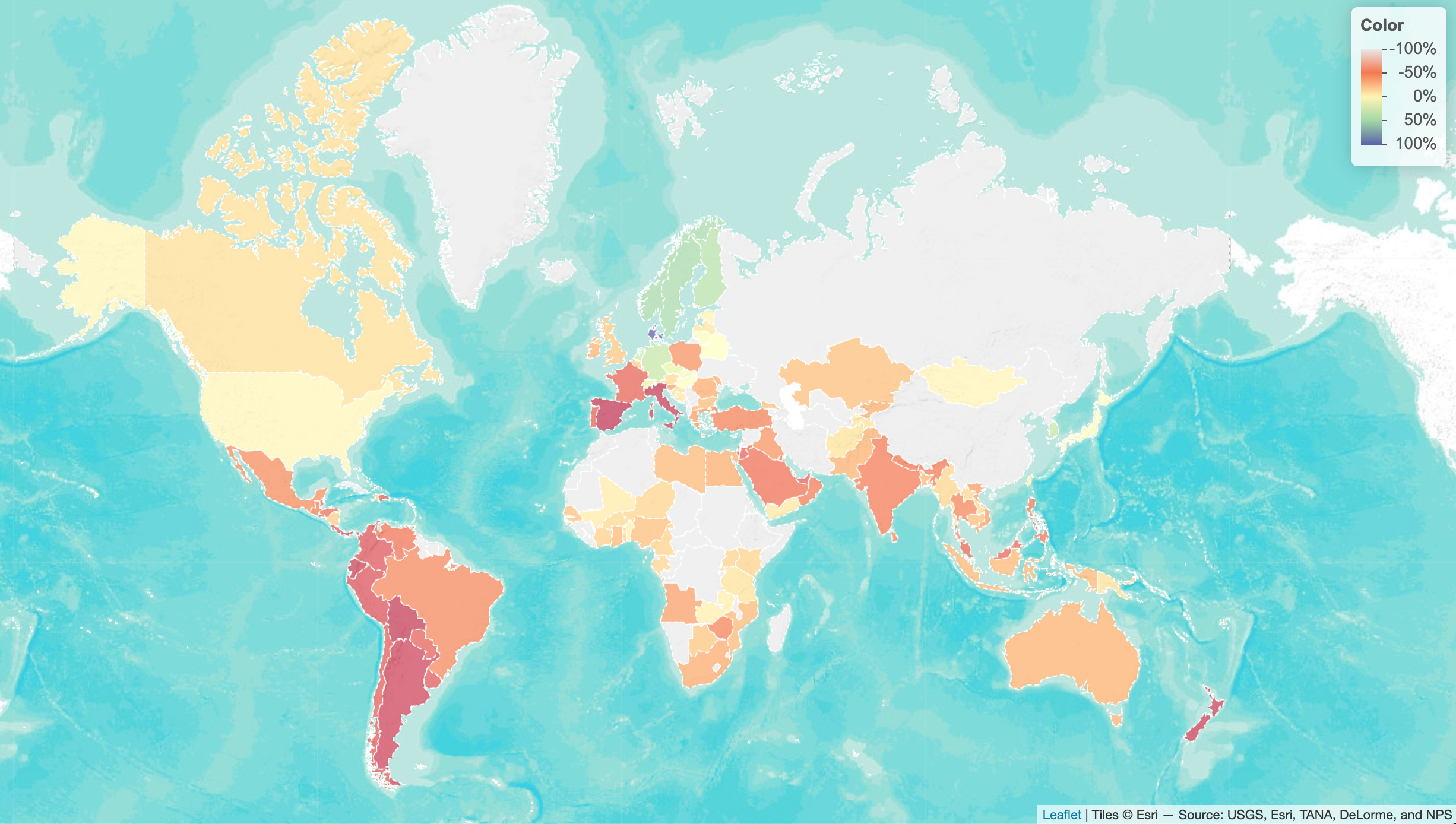